A Guide to Political Yard Signs 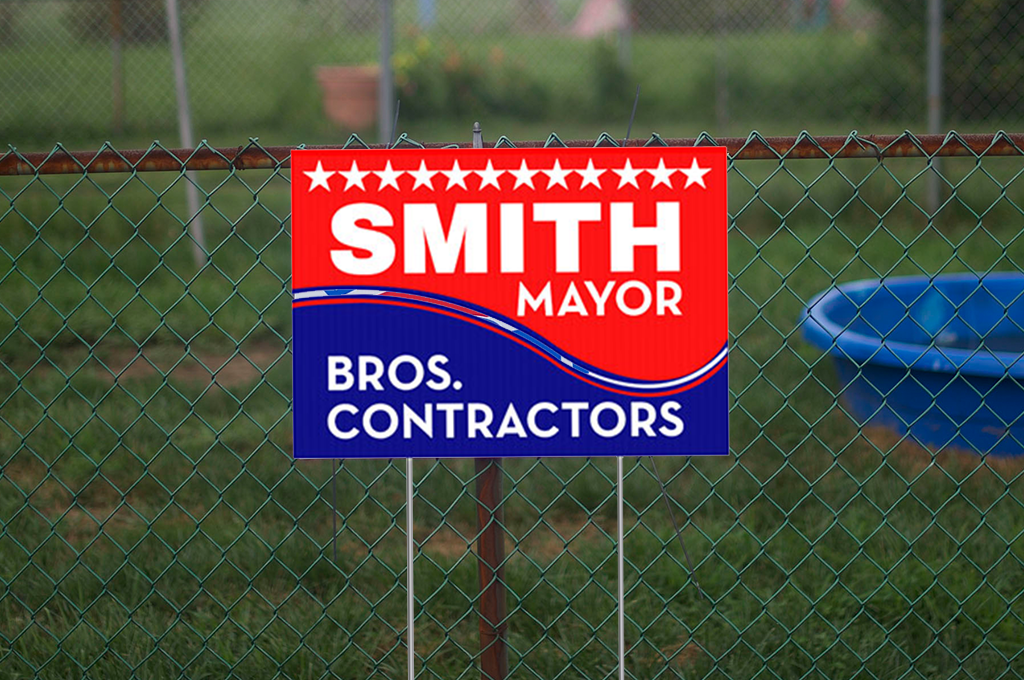 Political yard signs, have long been a staple of American and Canadian political campaigns.

These signs come in various shapes and sizes, usually rectangular and between 12” and 40” on each side, and are often seen attached to posts for easy placement into residential lawns, on roadsides, or attached to fences with wire.

Political scientists estimate that each yard sign represents 6 to 10 votes for the candidate or political issue. Most candidates need to improve their name recognition, and yard signs are one historically effective way to do so.  In fact, according to the Washington University Journal of Law and Policy, campaign yard signs may be the least expensive way political speakers have of reaching large audiences.

Laws governing the placement of political signs vary from state to state and community to community.  However, basic to all the laws and regulations is the First Amendment Right to Freedom of Speech.

In fact, the U.S. Supreme Court has specifically taken up the issue of political signage on more than one occasion, describing political signage as a “decidedly unique and historical medium” that may have “no practical substitute.”

In another U.S. Supreme Court case the ruling was worded even more strongly:

“The decision also recalls the respect that our culture and laws hold for individual liberty in the home. The principle carries a special resonance when the government tries to constrain a person’s ability to speak there. In the final analysis, the Court found that none of the town’s interests or concerns over residential signs warrants such an abridgment of its citizens’ First Amendment rights.”

Given the fact that the right to communicate political preferences with yard signs is protected by the U.S Constitution, states and local communities may still regulate the placement and removal of those campaign signs.

Most state and local regulations have to do with where the political signs may be placed and who is allowed to remove them.

Since every state and locality has their own, sometimes slight, variations on political yard sign regulations, the information given here is to be for general understanding and not explicit legal advice.

According to the U.S. Supreme Court in Reed v. Town of Gilbert, local governments may no longer regulate a sign simply because it’s a campaign sign. Instead, under the Reed verdict, a sign regulation is presumptively unconstitutional if an agency has to read the sign to determine how it’s regulated.  Therefore, political signs cannot be more stringently regulated than other signs (with the exception of polling place proximity).

Political signs may not be prohibited in the parking strip portion of the right-of-way (that area between the curb and the sidewalk), but probably can be excluded in the median, traffic circles, and other portions of the right-of-way.  This restriction must apply equally to all signs, not just campaign signs.

Political signs within the parking strip portion of the right-of-way generally require the consent of the abutting property owner.

The U.S. Supreme Court has ruled that the display of political and other types of signs on residential property is a unique, important, and protected means of communication, and towns cannot restrict the display of such signs. The decision has not been overturned.

Pre-election time restrictions on posting political signs are unconstitutional. For example, a regulation limiting placement of political signs to within 60 days of an election would be in violation of federal law.

A reasonable post-election time period for removal had previously been deemed Constitutional.  However, according to recent Supreme Court rulings, a local regulation on removing political yard signs is not Constitutional and may not be enforced.

Every state has a law creating campaign-free buffer zones outside of polling places — laws the Supreme Court has long upheld.

Regulations regarding the placement of signs near a polling place must balance the sanctity of the vote with the right to freedom of speech.

Is it illegal to remove political signs?

Yes, it’s illegal to remove a political sign that has been put in place legally.  People who remove yard signs can be found guilty of theft.  An offender tampering with a campaign yard sign (or any other yard sign) can be charged with damage to property and trespassing.

Local municipalities have the right to remove signs which have been placed in violation of local regulations.

But what about people that own homes or condominiums in a planned community?  Do they have the same rights to display their political views?

All the court rulings previously mentioned involve public lands or individual private property.  The court rulings involved private home owners versus government entities such as municipalities, towns, and cities.  The cases all were between a private citizen and the government.

The question is, can the same political speech protections be applied in cases involving a private homeowner and a private Home Owners Association or condominium association.

It’s an interesting point. Since the Constitution and our Bill of Rights were written to protect American citizens from the government, and not necessarily from each other, does this same First Amendment protection apply?

In states and localities without regulations on political signs, homeowners associations can do what they want without breaking the law.

However, some states prohibit community associations from restricting political signs. Others say HOAs have to allow signs, but can restrict them by, for example, limiting the number of days they can be displayed or mandating a limit on the size of the sign.

Here are a few tips if you want to fight to keep your lawn sign and you are a member of a planned or private community:

* First, read your HOA’s governing documents to see what they say about signs.

* If there’s no state protection, check closer to home.  Does your city, county, or other local jurisdiction have laws about yard signs. (You can search for these online in a similar manner to the state or simply find the local website and phone number and make a call.)

* If you have no protection for your political yard sign from any government agency, go to a board meeting and ask the board to allow political signs on a limited basis next year.

* If the board refuses your request, you can always run for board membership and work to change the rules from within.

If you want to go to court and fight for your right to proclaim your political views with a yard sign, the most successful recent argument has been that the association is a state actor; that is, a quasi-governmental body. In a series of cases in different jurisdictions, this argument has been somewhat successful, although there remains little precedent on the issue.

Political yard signs continue to be one of the most powerful tools available to political campaigners.  They can be part of a groundswell of local recognition.

Contact us to find out more about getting political yard signs with the right size, design, and color to make your candidate and your views stand out from the crowd.

Tags: best of signs, bestofsigns, political signs, political yard signs, Yard signs
« A Guide to Trespassing Sign Laws for Every State
How to Design a Logo for Business »
You can leave a response, or trackback from your own site.